My 03 Pontiac vibe was recently stolen. Got it back but, I need help figuring out which wires go where. There's 6 wires that go to the ignition switch. I bought 2 toggles and a spring loaded switch for the starter, just need help with a wiring diagram or explanation on how to do it in general
Top

Here are the wire colors for the ignition harness. You really should use 3 toggle switches (2x ignition, 1x accessory) and 1 momentary switch for the starter. But you can probably get away with putting the 2 ignition wires together on a single toggle. You won't need the keysense wire. If you have any questions, feel free to ask and I'll do my best to help. Lucky for you the 03's don't have any immobilizer to deal with. 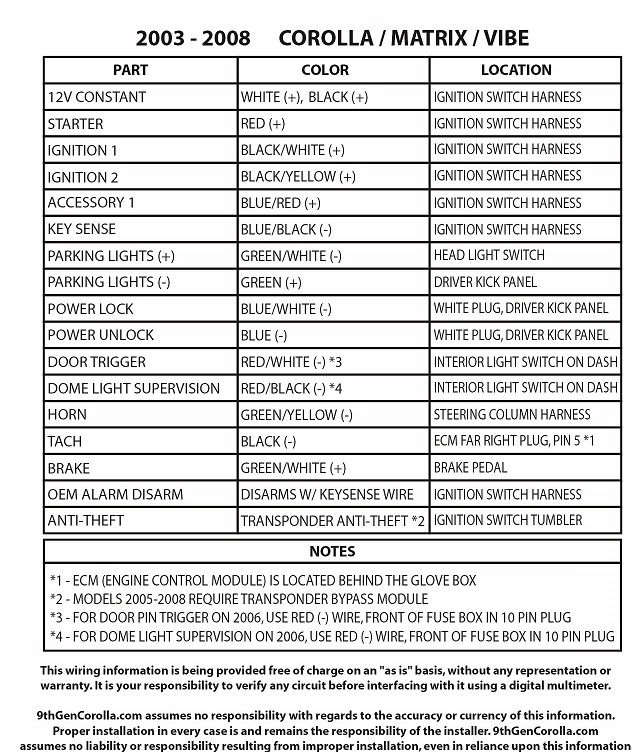 Okay so I question if If all the wires are 'technically' necessary. I tested them, (thru trial and error, not with a multi meter) and wonder do I run the 3 switches I have off the main power wire, or do any of the other wires carry power? (From what I know or learned i just need 'acc'; 'on'; and 'start' to function?) A few wires seem to be uneccessary?
Top

The only wires you need to start the vehicle will are the first 5 lines in the list. These will all be in the main ignition harness going up the steering column. You can run ign.1, ign.2, acces., and starter all from the large heavy gauge white and black wires.

Is there any way you can specifically tell me how to wire this up. I'm just a kid trying to start my car.. I'd attach pictures but it wont let me. Please help. I believe I have designed a "harness' that'll work, but the first few trials blew a few fuses
Top

I've ran the black 12v constant to the 2 toggle switches (black and yellow/ignition 2 and blue and red/accessory) and obviously the starter. And everything works as if you would turn a key (acc, on, start) but it wont start and it should. The only wires that are not hooked up are ignition 1 (black and white) and a white wire. Obviously ignition 1 sounds important, and when I give it juice, it sounds like a relay switch goes off.. I dont want to damage the car further. Do I just wire ignition 1 into one of the 2 toggles I have going on? And what is the purpose of this white wire? (So confused without a multimeter, tired of blowing fuses) (please help)
Top

Can you not just reattach the wires to each other where they were cut? 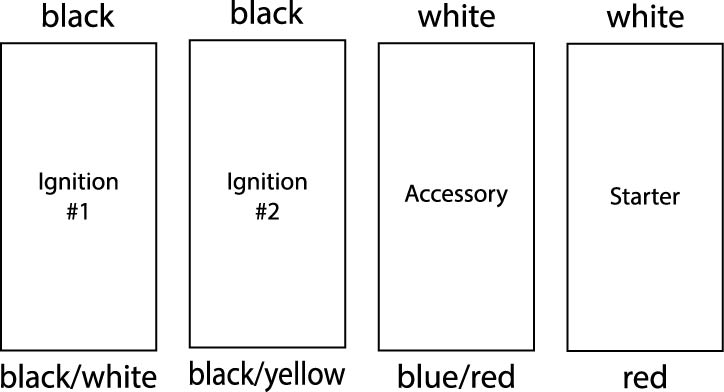 If you don't have separate toggle switches for each ignition wire, then connect both black/white and the black/yellow together.

After everything is connected, to start the car, you'll need to turn on both ignition toggles, then use the starter toggle until the car starts. The accessory toggle only needs to be switched on after the car is running. However, the accessory toggle isn't actually necessary to make the vehicle run, but controls the radio and other creature comforts. Turn all off when you wish to turn the car off.

Keep in mind there are other wires running up the steering column. Including headlight, parking light, cruise control, horn, among others. This will only start the car and allow it to run. You will also still need the key in the keyhole or else your steering will lock up.

It's more of a someone jammed a screwdriver in my ignition and I'm trying to make it less stealable situation.. the whole ignition was pounded out and I have to use the cylinder tumbler thing itself to start my car.its ridiculous.i figured using the harness thing that goes to the ignition, and some switches (and of course hidden "killswitches") would make it harder to steal. I just haven't quite figured it out. I have 2 toggles and a spring loaded for the starter. I believe its wired right but it eont exactly start because I left out the white wire and the ignition 1 wire (black and white).. I theorize just hook ignition 1 up with the blue and red wire? (Which makes my radio work) also as said before when I give the wire in question (ignition 1) power, I can hear a relay trigger, which us why I theorize it should be hooked to my first toggle switch with my radio (accessories)
Top

I think I understand a little better. Are you saying I need a 3rd toggle?
Top

Wouldn't it be easier to just hit up a salvage yard and see if one of the vibes still has a key available, and then just abscond with the entire ignition section? If you then want to make it harder to steal, just put a stack of toggle switches across the dash board, and label them things like "Fuse 1" "Ignition 1" "Pre-Ignition" "Starter" "Radio" "Windshield Wiper" "Brake Lights" "Fog Lamp" "Rear Defroster" "Weasel Wash" "Trunk Monkey"

First I've even heard of someone stealing a Vibe. I've had mine broken into twice - once they stole stuff, the other they just smashed the drivers side windows (front and back), and stole nothing.

In any case, what'll happen is that someone will sit down behind the wheel, and not have a clue as to how to start the car - even though you just need the key.
Top

I live in flint, Michigan. People steal water here and hahaha that's funny and a good idea. I think I just about got it now I'll lyk. Thanks for all your help
Top

I would recommend it honestly. If those 2 wires were meant to be tied together, they wouldnt be separate in the first place. Besides that, I don't know how much power you'll be drawing through the toggles, and you take the chance of melting them if you put thru too many amps.
2003 Matrix Xrs Automatic - SOLD :'(
2011 Rav4 Sport
Top

I've thought about putting a knife switch in for the starter relay.
Top

Hi,
I have a switch and It has to be lgintion wiring. It has 6 wires. Now I don't understand where to put it. Can anyone tell me a simple solution.
Last edited by Greyson on Sun Nov 20, 2022 11:20 am, edited 1 time in total.
Telbix Lighting Online Australia.
Top