So I recently went through the hell that is also know as replacing a rear cv axle on a 2006 awd vibe. I, like most, ended up with the Rear suspension adjustment bolt seized into the bushing sleeve. Its still not out. Looks like ill have to cut it out and the bolt next to it that holds the other side of the knuckle. My knuckle is 42304-63010 from toyota. It is in the US, Im in Canada, so its 1-2 weeks away. Toyota doesn't sell the bushings separately. I can buy the entire assembly for $375 CAD which is a lot considering my only problem is a seized bolt in a bushing. Toyota did tell me that there are aftermarket bushings available. Apparently they just go on/off with a ball joint press. Never done this, but I'm an experienced mechanic so I'm sure ill figure that part out. Toyota wants $70 CAD for the adjuster bolt assembly (rear suspension toe adjust cam assembly, 1 per side) and I haven't asked about the bolt next to it yet. It is not an adjusting bolt but is likely an odd size that i have to buy special for this application.
Anyone know where to source the bushings? Im having a tough time finding them, Looking for the nuts/bolts/adjuster bolts too. Ive read some posts here about people dealing with this but no specifics on bushings etc. (ex. https://forums.genvibe.com/phpBB3/viewtopic.php?t=38688)
The two bushings labelled number 5 in the picture (bottom of rear knuckle) are the ones im after.
Damn curse of the Matrix/Vibe AWD rear end continues

I don't know of anywhere that just those bushings are readily available as an aftermarket part. Maybe with www.monkeywrenchracing.com, but even that's unlikely.

This is a good website that usually lists the Toyota part numbers and diagrams..If the bushings are available separately, should be able to find them here.

I pulled the trigger and ordered them yesterday. Around $20 CDN each from Siberian Bushing in BC...im in Alberta so the shipping should be pretty quick. I ordered the bolts from toyota. I'll post back to say if this works or not for anyone who has to deal with this in the future.
Top

Update:
Took 3-4 weeks to get the bushings in the mail because of canada post, covid and christmas. When i finally got them, i had to use an oxy/acetylene outfit to torch the out the knuckle. Only knicked one of the supports and had to do a couple little welds and some grinding to fix that. Ive been using a torch for 20 years so that will tell you how difficult it was not to cut anything you shouldn't. The two bushings were siezed in the knuckle and i ended up bringing them to the shop in town where they couldnt get them out either and had to cut them out. Then they pressed they back in for me. Everything went back together pretty easily. A ball joint press will not press this type of bushing in or out. not a chance. the right tools and a shop press were required and they still had to cut the things out. It was an experience. Don't ever do this unless you have to.
Shop press : $40
bearings + Shipping : $50
Alignment afterwords : $100
Time : Glad i wasnt counting
Nuts/Cam bolts from toyota: $75
Cost of a new knuckle from toyota was almost $400 and 1-2 week delivery.
Top

Glad you were able to get it resolved (eventually).

Funny you posted this update. I am currently replacing the subframe on another AWD Vibe. We also have those bolts frozen in place. I managed to find those bushings on eBay.

They also sell the other subframe bushings 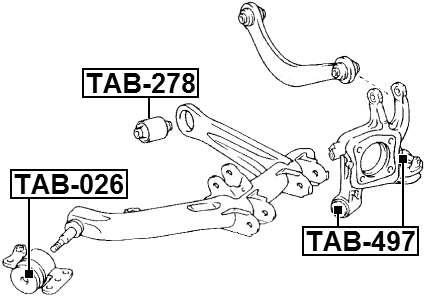